Telling a Simple Polytope From its Graph

Micha A. Perles conjectured in the ’70s that the graph of a simple

-polytope determines the entire combinatorial structure of the polytope. This conjecture was proved in 1987 by Blind and Mani and shortly afterwards I gave a simple proof which I like very much to present.

be a bijection from the vertices of

to the vertices of

which maps edges to edges. In other words,

is an isomorphism between the graph

extend uniquely to a combinatorial isomorphism between

? The answer is ‘yes’ but the argument is not so easy. There are also several related open problems.

A quick reminder about simple polytopes. A

is simple if every vertex

edges. (Equivalently, if the dual polytope

is simplicial.) Thus the graph

-regular graph. The crucial property of simple polytopes that we use is that for every vertex

and every collection of

there is a unique

-face of P which contains

Among the famous simple polytopes are the cubes and simplices (in any dimension), polygons in the plane, and the dodecahedron in dimension 3 (but not the icosahedron or octahedron).

More background on polytopes can be found at the end of the post. (It is taken from this post presenting five open problems regarding polytopes.).

of the vertices of a simple

is a local maximum if for every neighbor

. Of course, the maximum vertex in

with respect to the ordering is a local maximum.   An ordering of the vertices of

is called good, if for every face

every local maximum in

is the global maximum in

( Just to make it clear: a vertex

is a local maximum in

, if for every neighbor

. The global maximum in

is the maximum vertex of

There are several variations of this notion. Instead of talking about the entire ordering we can talk just about the orientation it induces on edges of the graph. We orient an edge

. This is an acyclic orientation of the graph and being good or bad depends only on the orientation. Good orientations are called “unique-sink acyclic orientations”.  Also, as we will mention later, good orderings of the vertices of a simple polytope are closely connected to shelling order on the facets of the dual polytope.

The proof: part I

be the graph of a simple

as the number of neighbors of

which are smaller than

with respect to the ordering. Let

be the number of vertices of degree

be the number of nonempty faces of

2) Equality holds if and only if

is a good ordering.

be an ordering of the vertices of

. We will count pairs

is a face of

is a vertex in

which is a local maximum with respect to

The first thing to note is that if

is a vertex of degree

then  it is a local maximum in precisely

faces. Therefore the number of pairs is precisely

On the other hand, every face

. This is the vertex of

which is the global maximum! If

is a good ordering then every face

which is a local maximum and therefore

is not a good ordering then every face

contributes more than one! Therefore

Telling the number of faces and the good orderings

Now we can tell the total number of faces of

by looking at the graph

. We compute the value

for every ordering of the vertices of

. The minimum value over all orderings

is the value of

– the number of non-empty faces of

We can tell also the good orderings. We compute the quantity

of the vertices of the polytope and identify the minimum value

must be the number of faces of the polytope

. By the claim an ordering

is a good ordering if and only if

-dimensional polytope. What do we know about

? It is a k-regular graph. In fact it is an induced subgraph of

is an induced subgraph of a graph

consists of a subset of the vertices of

and all the edges of

Claim: An induced connected k-regular subgraph H of G(P) is the graph of a face if and only if its vertices come first in some good ordering of

Proof: There are two directions to prove. We start by showing that the graph of a

is an induced connected

whose minimum on the polytope

is attained precisely at

. (This is essentially the definition of a face: a face is the intersection of the polytope with a supporting hyperplane, and we can take

to be a linear functional that vanishes on

and hence also on

.) Now we can perturb

, and such that all these values are still smaller than the values on all other vertices.

is an induced connected

-regular graph and that

is a good ordering such that the vertices of

are smaller with respect to

than all other vertices. Let

be the largest vertex of

is a local maximum in the

which is spanned by the

is a good ordering,

is a the global maximum vertex of

. It follows that all the vertices of

. (Because the vertices of

are precisely all the vertices that are smaller than

with respect to the ordering.) Therefore

. But note that the only

-regular subgraph of a connected

-regular graph is the graph itself! Therefore, the vertices of

are the vertices of the face

-polytope from partial information. My chapter on graphs and skeleta of polytopes in the “Handbook of discrete and computational geometry” contains several further such results. See also the new edition of Grunbaum’s classic book “Convex Polytopes“.

Let me mention two results: Hassler Whitney proved that the graph of a every 3-dimensional polytope determines its faces. The faces are simply the induced non-separating cycles. A theorem of Micha A. Perles asserts that the [

]-dimensional skeleton of a simplicial

The algorithm to tell the polytope from a graph is simple but terrible. To start you have to consider all the orderings of the vertices of the polytope. All other theorems about reconstruction of the entire combinatorial structure of a polytope from partial information give simple polynomial algorithms.

Is there a polynomial time algorithm for telling the polytope from its graph? Eric Friedman proved a startling theorem asserting that there is a polynomial algorithm! (It deserves a whole separate post.)

-dimensional simplicial complex. The puzzle of

is the graph whose vertices are the facets of

-dimensional. (The puzzle is precisely the same graph we associated to families of sets in the longish series of posts about Hirsch’s conjecture.)

Blind-Mani’s theorem stated in a dual form asserts that simplicial polytopes are determined by their puzzles and this is the way Blind and Mani stated it. We can talk also about puzzles where the pieces are themselves complicated polytopes which come with instructions how to glue two pieces locally, and ask if there is a unique global solution.  (If the pieces are simplices, then all ways to glue them along facets are the same.) This was studied by Michael Joswig.

The first part of the proof described above asserts that for shellable simplicial complexes, the shelling orders, the total number of faces, and (by a slight extension of the proof) the f-vector are determined by the puzzle. In fact, the proof gives the following claim. 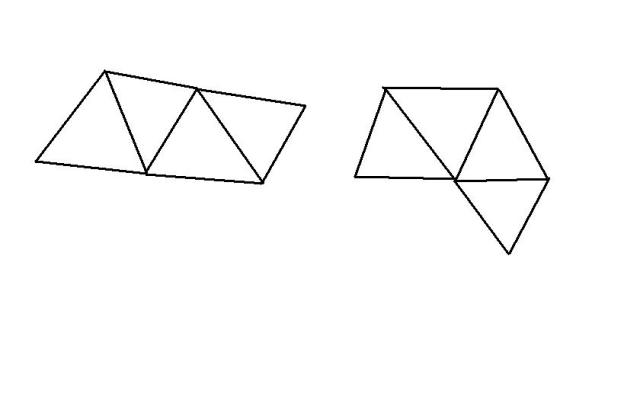 Conjecture 1:  A spherical puzzle always has a unique solution!

Conjecture 2: The puzzle of a

be the graph of a simple 4-dimensional polytope.  Then a 3-regular induced subgraph

is the graph of a facet if and only if it is planar and non-separating.

An even stronger conjecture proposed by Perles (where

is not assumed to be planar) was refuted by Christian Haase and Gunter M. Ziegler. Here is a modelby Nikolaus Witte of their example.

be the graph of a 4-dimensional spherical puzzle. Then a 3-regular induced subgraph of

corresponds to the link of a vertex if and only if it is planar and non-separating.

We can also ask similar questions for puzzles of simplicial manifolds.  Puzzles of general triangulated closed surfaces do not determine the triangulations; note that the puzzle of the 6-vertex triangulation of the real projective plane (which is the Peterson graph) has more automorphisms than the entire triangulation has!

And here is a conjecture (that we will not explain here) which is a little analogous to the conjecture that the f-vectors of Cohen-Macaulay complexes are determined by the puzzles.

We say that a

such that for every

with the union of

is homeomorphic to a

-dimensional ball or sphere. This condition implies that the entire complex is homeomorphic to a sphere or a ball. (We mentioned shellability here and here.)

For simplicial complexes, shellability is especially simple and becomes a purely combinatorial condition. The intersection of

with the previous facets should be a (nonempty) union of some (or all) of its own facets. In a shelling sequence of facets, adding

to the simplicial complex

has a very simple form. We add to

and all sets that contain

which are contained in

we say that adding

is a shelling step of type

amounts to good ordering on the vertices of the dual polytope. The type of a facet in the shelling is the degree of the corresponding vertex in the good ordering.

The fact that the boundary complex every

-polytope is shellable was assumed in 19th century proofs of Euler’s theorem in high dimension but it was first proved by Bruggesser and Mani in 1970.  Peter Mani once told me that he found a crucial ingredient of the proof in a dream.

A convex polytope is the convex hull of a finite set of points in an Euclidean space. A proper faceof a polytope P is the intersection of P with a supporting hyperplane. The empty face and P itself are regarded as trivial faces. The convex hull of a set of points which affinely span a d-dimensional space is a d-dimensional polytope or briefly a  d-polytope. Faces of polytopes are themselves polytopes, a k-face is a short way to say k-dimensional face.  0-faces are called vertices, 1-faces are called edges and (d-1)-faces of a d-polytope are called facets. The set of faces of a polytope is a POSET (=partially ordered set) which is a “lattice”,  “atomic”, and “graded”.  For a polytope P

denotes the number of k-faces of P. The f-vector of P is the vector

. Two d-polytopes P and Q are combinatorially equivalent if there is a bijection between the faces of P and the faces of Q which preserves the order relation.

The five open questions in this post belong to the combinatorial theory of polytopes that deal with the set of faces of polytopes. (There are also interesting metrical and arithmetic questions about polytopes.)

If P is a convex polytope which contains the origin in its interior, the polar dual of P is the set of all points y so that

A polytope P is centrally symmetric if whenever x belongs to P so is -x.

8 Responses to Telling a Simple Polytope From its Graph