The Polynomial Hirsch Conjecture, a Proposal for Polymath3 (Cont.) 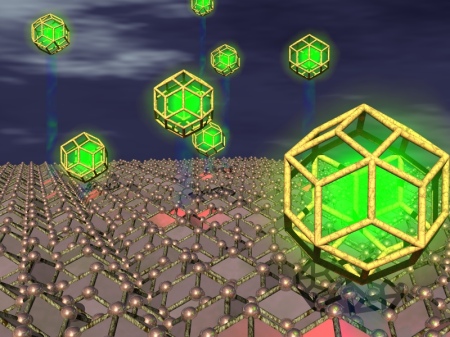 is the convex hull of a finite set of points in a real vector space. A polytope can be described as the intersection of a finite number of closed halfspaces. Polytopes have a facial structure: A (proper) face of a polytope

is the intersection of

is a supporting hyperplane of

is contained in a closed halfspace bounded by

, and the intersection of

is not empty.) We regard the empty face and the entire polytope as trivial faces. The extreme points of a polytope

are called its vertices. The one-dimensional faces of

are called edges. The edges are line intervals connecting a pair of vertices. The graph

and two vertices are adjacent in

if there is an edge of

-dimensional faces of a polytop are called facets.

The Hirsch conjecture: The graph of a d-polytope with n  facets has diameter at most n-d.

A weaker conjecture which is also open is:

Polynomial Hirsch Conjecture: Let G be the graph of a d-polytope with n facets. Then the diameter of G is bounded above by a polynomial in d and n.

The avenue which I consider most promising (but I may be wrong) is to replace “graphs of polytopes” by a larger class of graphs. Most known upper bound on the diameter of graphs of polytopes apply in much larger generality. Recently, interesting lower bounds were discovered and we can wonder what they mean for the geometric problem.

Here is the (most recent) abstract setting:

whose vertices are labeled by

The only condition we will require is that if

is a vertex labeled by

is a vertex labeled by the set

, then there is a path between

so that all labels of its vertices are sets containing

then the diameter of

is bounded above by a polynomial in

Everything that is known about the APHC can be described in a few pages. It requires only rather elementary combinatorics; No knowledge about convex polytopes is needed.

is the right upper bound) will apply automatically to convex polytopes.

A negative answer to APHC will be (in my opinion) extremely interesting as well,  but will leave the case of polytopes open.  (One of the most active areas of convex polytope theory is methods for constructing polytopes, and there may be several ways to move from an abstract combinatorial example to a geometric example.)

If indeed we will decide to go for a polymath3, the concrete problem which I propose attacking is the APHC. However, we can discuss possible arguments regarding diameter of polytopes which use geometry, and we can be open to even more general abstract forms of the problem. (Or other things that people suggest.)

Reading the recent very short paper by  Freidrich Eisenbrand, Nicolai Hahnle, and Thomas Rothvoss and the 3-pages paper by Sasha Razborov (the merged journal paper of these two contributions  will become available soon, ) will get you right to the front lines. (There is an argument from the first paper that uses the Hall-marriage theorem, and an argument from the second paper that uses the “Lovasz local lemma”.)

Questions and remarks about polytopes, the problem, or these papers are welcome.

5 Responses to The Polynomial Hirsch Conjecture, a Proposal for Polymath3 (Cont.)