Around the Garsia-Stanley’s Partitioning Conjecture

Art Duval, Bennet Goeckner, Carly Klivans, and Jeremy Martin found a counter example to the Garsia-Stanley partitioning conjecture for Cohen-Macaulay complexes. (We mentioned the conjecture here.)  Congratulations Art, Bennet, Carly and Jeremy!  Art, Carly, and Jeremy also wrote an article on the the Partitionability Conjecture in the Notices of the AMS.  (Here is an article about it in the Brown Daily Herald.) Let me tell you about the conjecture and related questions. Here are the last few sentences of the paper.

Even though statements like the Partitionability Conjecture can seem too beautiful to be false, we should remember to keep our minds open about the mathematical unknown—the reality might be quite different, with its own unexpected beauty.

I. Symmetric chain decomposition for the Boolean lattice

I will start with an analogy. 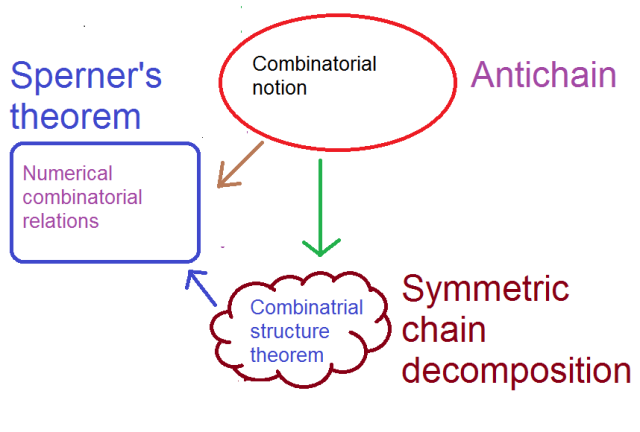 The partition of P(n) into saturated symmetric chain gives you a combinatorial structure that implies the “numerical” content of Sperner’s theorem. The Garsia-Stanley’s conjecture has a somewhat similar flavor.

Let me note that there are stronger numerical results about antichains such as the LYM inequality (see the same post) and  an interesting question (I think)  is:

Question: Are there decomposition theorems for P(n) that support stronger numerical results about antichains,  such as the LYM inequality?

The general framework of our discussion is described in the following diagram: 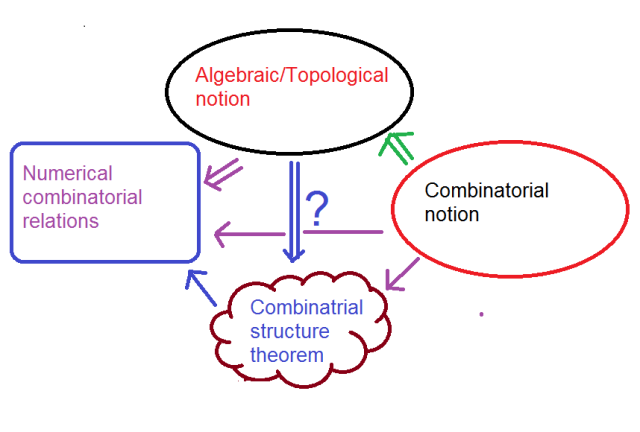 The decomposition theorem was proved by Stanley.

Fixing a field of coefficients, a simplicial complex

is acyclic if all its (reduced) homology groups vanish.  A simplicial complex is collapsible if you can reduce it to the void complex by repeated deletion of pairs of faces (F,G) where G is a facet (maximal face) F is contained in G and is not contained in any other facet and

. Note that a collapsing of

gives a perfect matching among the faces of

be the number of

. The Euler-Poincare relation asserts that

, Morse inequalities (a baby version) assert that all the

s are nonnegative, and (I showed that) they also satisfy some non linear relations of Kruskal-Katona nature. In the paper A combinatorial decomposition of acyclic simplicial complexes, Stanley proved that if K is acyclic, there is a perfect matching

in the set of faces of

which resembles the matching obtained by collapsing, Namely (1)

‘s form a simplicial complex. The existence of this perfect matching implies the numerical consequences for acyclic complexes. (But it does not imply that the complex is acyclic.)  Earlier, I proved that a perfect matching with the first property exists. This implies the linear (Morse) inequalities.

Zeeman conjectured that if a 2-dimensional space

is the unit interval. This innocent-looking conjecture  is widely believed to be false (perhaps even outrageous) because it implies both the Poincare conjecture (now theorem) and also the Andrews-Curtis conjecture.

The combinatorial notion: Discrete Morse theory. (This is an important notion developed by Robin Forman in the mid 90s.)

The decomposition theorem was proved by Art Duval in the paper A Combinatorial Decomposition of Simplicial Complexes.

In this case  Duval proved that the set of faces in the complex admits a matching (leaving isolated faces that correspond to the Betti numbers) which implies the numerical consequences found by Bjorner and me. It resembles the structure of discrete Morse theory.

A decomposition conjecture: the the Garsia Stanley conjecture (now disproved). (A weaker form was proved by Duval and Zhang.)

.  The paper by Duval, Geockner, Klivans, and Martin,  A non-partitionable Cohen-Macaulay simplicial complex, presents a counter example. A weaker form of the conjecture was proved by Duval and Zhang.

The Cohen Macaulay property for simplicial complexes and POSETS

We discussed face rings, and the Cohen-Macauly property in various previous posts like the one by Eran Nevo on on the commutative algebra connection to the g-conjecture, and the happy birthday post for Richard Stanley. A

is Cohen-Macaulay (with respect to a field

and for every face

. This property is equivalent (by a deep theorem of Riesner) to the Cohen-Macaulay property for the face ring of

. The ring theoretic definition of Cohan-Macaulayness can be seen as an algebraic form (on the level of vector spaces) of the combinatorial decomposition conjectured by Garsia and Stanley.

The Cohen-Macauly property implies that a certain linear combinations of face numbers called the h-numbers are non-negative, and in addition satisfies certain nonlinear relations originated in the 1927 work of Macaulay. For complexes that admit the partitioning conjectured by Garsia and Stanley the h-numbers count the number of intervals in the partition according to the dimensions of the

Shellability and the decomposition conjecture

-dimensional simplicial complex is shellable if it can partitioned into intervals  [

, and the union of the first

intervals is a simplicial complex for every

. A shellable simplicial complex is Cohen Macaulay (a direct proof of the ring-theoretic statement was was given by Kind and Kleinschmidt in 1979.) Shelling of a simplicial complex can be seen as a special form of decomposition.  It is a partitioned into intervals  [

with the additional property that the union of the first

intervals in the partition is a simplicial complex for every

-vector. (Like the decomposition theorems of Stanley and of Duval.) Extend to the general case of Duval-Zhang theorem!

2) Is there an analog for discrete Morse theory (using either Boolean trees or full Boolean intervals) for triangulated manifolds (and more generally Buchsbaum compexes) for the usual homology and for various classes of  iterated homology?

3) For the class of triangulated spheres is there a tree-decomposition a la Duval and Zhang that supports the non negativity of g-numbers or the full g-conjecture?

4) Can these partitioning theorems be extended to more general classes of regular CW complexes?

And let me end with two more sentences from the ending paragraph of the Notices paper.

The story of the Partitionability Conjecture has many facets. Shellability, partitionability, constructibility, and the Cohen-Macaulay property come from different but overlapping areas of mathematics: combinatorics, commutative algebra, topology, and discrete geometry. The hierarchy of these structural properties turned out to be more complicated than we had anticipated, just as Rudin’s and Ziegler’s examples demonstrate that even the simplest spaces can have intricate combinatorics.