This story is implicitly referred to in the 2008 opening post of this blog.

It was high time to raise the level of the discussion, I thought. Princeton, Fall 1995. We were a group of mathematicians at the IAS lunch table, and discussing a really profound idea was called for. But I was missing a word and I asked Avi Wigderson what is the English word for a lion’s hair. Avi replied “layish”.

This was precisely what I was missing. It was time to voice my new thought:

” Isn’t it the case and isn’t it amazing that Avi’s hair looks just like a layish?”, I asked

Pierre Deligne looked busy thinking about his own business, but Enrico Bombieri looked interested and he was trying to understand what I was saying. Robert Langlands seemed to have got it –  he was nodding his head in agreement – or so I thought. I also sensed a positive reaction from Bob MacPherson.  Well, it takes time for great ideas, however simple, to get through.

But as is often the case, one great idea led to another.

Isn’t it amazing that the word “layish” means in Hebrew “a lion,” a meaning so close to the English meaning? I asked

While trying to further repeat, promote and discuss these two ideas a conflicting piece of information came to my mind. Another word for a lion’s hair in English was something like “main” or “mane”, I started to vaguely remember. When I asked Avi about it, he could not hold his laughter any longer, and the sad reality had emerged.

The second great idea was just an artifact of Avi’s juvenile behavior, a behavior that  also had a devastating effect on the presentation of the first idea. The first idea, as great as it might be,  failed to come through due to problematic notation. It should have waited for another opportunity. And now, 22 years later this opportunity has come!

The observation regarding Avi’s hair is not isolated. Nati Linial already noted in AviFest, Avi’s resemblance to the famous Georgian writer  Shota Rustaveli and mention also the resemblance to Bin Laden – a connection which was first made when Avi, shortly after 9/11, entered a stand up joint in NYC, and the comedian immediately stopped everything and said: “Ladies and gentlemen, Osama Bin Laden”! The shape of Rustaveli’s layish remains however, a mystery. 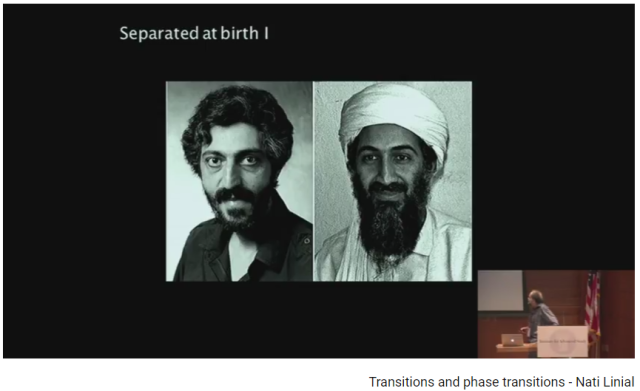 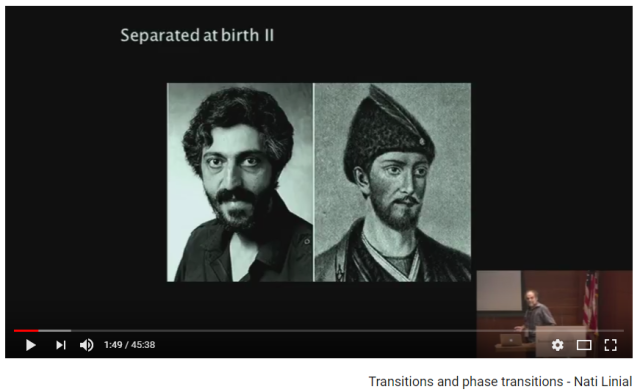