Apropos Russel’s universes, Boaz told me about a new cryptography “world” called Obfustopia that can be found (along with some modification of the original worlds) in Boaz’ survey paper. I heard about it and about the related important LWE (learning with errors) problem also from Alon Rosen.

The bottom line is that, as far as I can tell, Superiorita is the most beautiful and evidence-supported world that is currently on offer.

Boaz’ main argument for his point of view is:

…as far as I can tell, these engineering difficulties are not fundamental barriers and with sufficient hard work and resources the noise can be driven down to as close to zero as needed. 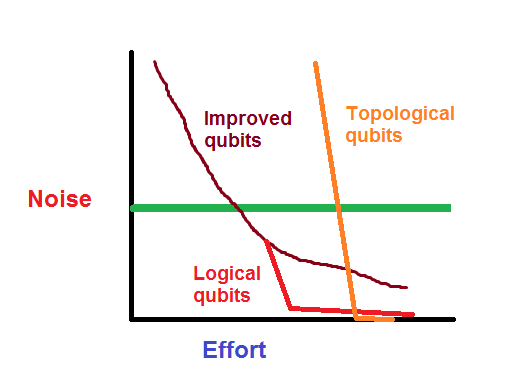 It is a common belief that by putting more effort for creating qubits the noise level can be pushed down to as  close to zero as we want. Once the noise level is small enough and crosses the green line, quantum error correction allows logical qubits to reduce the noise even further with a small amount of additional effort . Very high quality topological qubits are also expected. 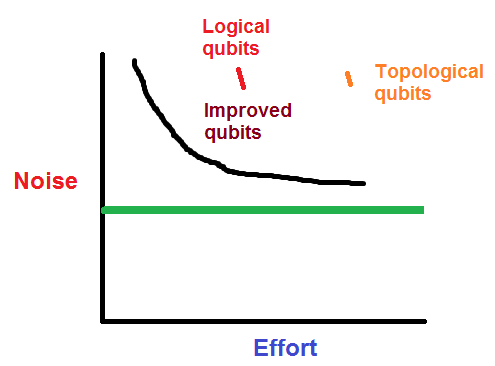 The picture suggested by my analysis

My analysis (see here and here and here) gives good reasons to expect that we will not be able to reach the green line and that all attempts for logical and topological qubits will yield bad quality qubits.

One can make a finer division of the superiorita world, and, in my view, the three most relevant worlds are the following:

Quantopia  – The model of quantum circuits is the correct description of local quantum systems in nature and therefore universal quantum computation is possible. Quantum supremacy and robust quantum information are present and perhaps even ubiquitous in the physical world. Quantum systems, quantum information and computation are analogous to classical systems, classical information and computation. Quantum error correction is analogous to classical error correction: an important engineering tool but not the thing that makes the qualitative difference whether scalabale communication or computation is possible. (This represents Boaz’ beliefs expressed in his post and his later comments.)

Superiorita (Quantum noise below the threshold.) Quantum systems are inherently noisy. Time-dependent quantum evolutions necessarily interacts with the environment and are therefore  noisy. The model of noisy quantum circuits is the correct description of local quantum systems in nature. Quantum error-correction  shows that small islands representing noiseless quantum circuits can be created and may also exist in nature. Hence quantum computation is possible. (This is perhaps the most common view among researchers in quantum information.)

Skeptica– (Quantum noise above the threshold.) Quantum systems are inherently noisy. Time-dependent quantum evolutions necessarily interacts with the environment. The model of noisy quantum circuits is the correct description of local quantum systems in nature. The noise level cannot be pushed below the level allowing quantum error-correction and quantum fault-tolerance. Hence quantum computation is not possible. Quantum supremacy is not demonstrated in nature and cannot be demonstrated in the laboratory. (This is were I stand).

There are, of course people who are skeptical about quantum computers from other reasons like the young Boaz who simply did not like physics. There are people who for various reasons are skeptical of quantum mechanics.

Quantopia  suggests that “quantum supremacy” and “robust quantum information” will be present and in fact ubiquitous in the physical world, while under ” superiorita” quantum supremacy represents rare a islands inside a large “decoherence desert” (as Daniel Gottesman referred to it in his beautiful picture portrayed in this post.) The difference between quantopia and  superiorita is relevant to Scott Aaronson’s hope that quantum computers promise  trillion dollars industry via simulations. While additional computing power is always welcome this idea is less promising in the  superiorita scenario where the usefulness of quantum computers to simulation is less clear.

Anyway, without even further ado, here is Boaz’ piece.

Quantum computing is one of the most exciting developments of computer science in the last decades. But this concept is not without its critics, often known as “quantum computing skeptics” or “skeptics” for short. The debate on quantum computing can sometimes confuse the physical and mathematical aspects of this question, and so in this essay I try to clarify those. Following Impagliazzo’s classic essay, I will give names to scenarios or “potential worlds” in which certain physical or mathematical conditions apply.

Superiorita is the world where it is feasible to build scalable quantum computers, and these computers have exponential advantage over classical computers. That is, in superiorita there is no fundamental physical roadblock to building large quantum computers, and hence the class BQP is a good model of computation that is physically realizable. More precisely, in superioriata the amount of resources (think…

This entry was posted in Quantum and tagged Boaz Barak. Bookmark the permalink.