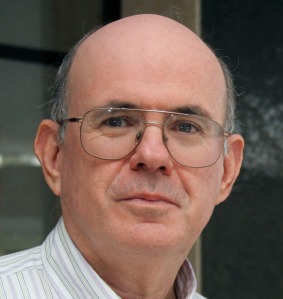 Some weeks ago I returned from a beautiful trip to Singapore and Vietnam. For both me and my wife this was the first trip to these very interesting countries. In Singapore I took part in a very unusual scientific meeting Laws: Rigidity and Dynamics, and my old-time friend Eliezer Rabinovici was one of the organizers. Eliezer, a prominent theoretical physicist,  was the force behind SESAME, a unique scientific endeavor cospnsored  by Jordan-Iran-Israel-Pakistan-Egypt-Cyprus-The Palestinian authority-Turkey which we previously mentioned in this post.  There is something amazing about a scientific project in Jordan sponsored jointly by Israel and Iran with the involvment of Turkey, Egypt, and Pakistan.

(Some background for readers unfamiliar with the situation in the Middle East: these days, as in the last decades, and even more so than before, there is some hostility and tension between Israel and Iran.)

Eliezer was also the main force behind Isreal joining CERN where he served as a vice-president. As having interest in both  theoretical aspect of soccer, and in actually playing, I was especially amazed by the festive soccer game organized by Eliezer between the two top Israeli teams, which included, in the break, a historic game between the HUJI soccer team and the team of the Knesset, the Israeli parliament.  (Our team won big-time.)

Not everyone shares my excitement about SESAME. What do you think? 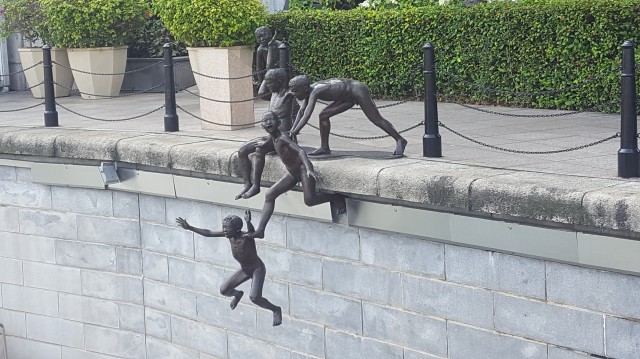 (Compare the sculpture with this picture.

On the flight to Singapore I saw the excellent film “darkest hours” about the early weeks of World War II and Winston Churchill’s  early days as prime minister. Also in the guided tours in Singapore a lot of attention was given to the surrender of Singapore and the war memories, and needless to say that the memory of war was very much present while we were traveling in Vietnam. The Churchill movie was truly excellent, bringing us back to the appeasement policy of the two prime ministers before him, and the tragic and disastrous pursuit  of peace. I was wondering if the great military weakness of England (and France) in 1939 was a logical consequence of the appeasement policy/philosophy. Can you have a combined policy of strength and appeasement? Is appeasement ever justified?

Laws and predictions in History

The conference I took part in in Singapore was the  3rd UBIAS Intercontinental Academia (ICA) – Laws: Rigidity and Dynamics, In short, it was a conference about “laws”. (The first conference of this kind was about “time” and the second about “human dignity”.) There were altogether 16 exciting mentors and 18 brilliant fellows from all areas of academia.

Nobel laureate  physicist David Gross was one of the mentors. (Ada Yonath was another mentor, but she arrived shortly before I left.) Both David Gross and Eliezer Rabinovici were pushing for some sort of physics-style laws or at least physics-style scientific exploration in History. I am quite skeptical about this idea and it even took me some time to realize that David and Eliezer were serious about it. (I suppose that the chaotic nature of historical developments is one good reason for skepticism.) Davis Gross (whom I found to be rather nice on a personal level) self-described  his view on academia and science as “arrogant” and his bold and provocative statements provided much food for thought and discussion throughout the conference. Anyway, when it comes to history, IAS historian  Patrick Geary gave quite an appealing argument for what we can expect and what we cannot expect from historical laws, with some very interesting examples. 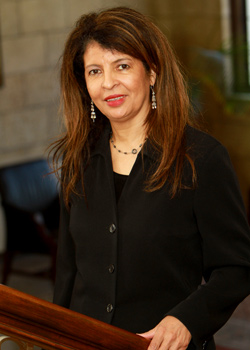 The afternoon session of March 20

Penelope (Penny) Andrews who had just arrived after a 24 hours flight from Cape Town gave a beautiful (and moving) talk entitled “The ‘casserole’ constitution – South African constitution and international law”. The talk was about the creation of South African human-rights based constitution,  and the struggle of South African democracy afterwards.  I strongly recommend watching the lecture. I was scheduled to be one of the responders.

What do I have to contribute to a discussion on the South African constitution? I had one personal story to tell: My father’s parents left from Lithuania for Israel (or Palestine as it was called under the British rule) in 1923 and my grandmother’s brother Hirsch stayed there.  During WWII  Hirsch’s daughter (my father’s cousin) Dora Love (Rabinowitz) was moved from one concentration camp to another, and lost her sister and her mother in the Nazi camps. After the war she met and married an English soldier Frank Love and they both moved to South Africa. Dora was a teacher at a Hebrew school in Johannesburg (among her students were Peter and Neil Sarnak), and also spent much of her life lecturing about the Holocaust. Her younger daughter Janet Love joined Mandela’s ANC at a young age, was considered a “terrorist” for more than a decade and had to flee South Africa. She eventually returned to South Africa and actually took part in the negotiations for the new constitution. After that she served in the South African parliament for five years and later on several governmental posts, now serving as the South Africa Human Rights Commissioner. (This story took Penny Andrews by surprise and it turned out she knows Janet well.)

Besides that I prepared one comment on the issue.  My comment/question/suggestion was about applying South Africas’s famous Truth and Reconciliation policy  in the criminal law. Can we apply similar principles there? I was especially thinking about the situation regarding sexual harassments and other sexual crimes which seem to be very wide spread. Here, as in other aspects of criminal law, it is not clear at all whether the instinctive demand for harsher punishments is correct. Restorative justice seems of relevance. (I suppose this is also an appeasing approach of some sort.)  Penny Andrews gave a very thoughtful answer including on cases in SA and elsewhere where a restorative system of justice is implemented. 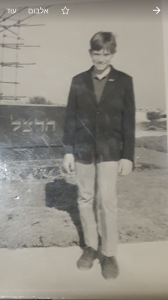 Janet Love (right). The Love family visited Israel in the late 60s (and brought me my first jacket). On the left is Seth, Janet’s older brother.  (I added more pictures at the end of the post.)

My own talk was about quantum computing. Given the wide interests of the audience I promised to be non technical and to have less mathematics in my talk compared to the talk about history by Patrick Geary. It is a good time to revisit this issue here on the blog but let me delay it to another post. David Gross asked me if I really thought that my hand-waving computer-science argument against quantum computers applies to show infeasibility of structures that serious physicists had given much thought to.  (He mainly referred to topological quantum computing.) My answer was “yes”.

Atul Parikh did a brilliant job in responding to me. Here is a link to a video of this session. For another session with two great talks by Atul Parikh and Ada Yonath see this video. A session with Michal Feldman’s conference-opening talk and Patrick Geary’s talk is here. A session with talks by Partha Dasgupta and David Gross is here. Combinatorialists may  enjoy the introduction by Robin Mason to Frank Ramsey at the beginning. (Have a look also at David and others’ response t0 Partha’s talk and Partha’s rejoiner.)  The entire collection of videotaped sessions is here. There are many interesting talks and discussions. 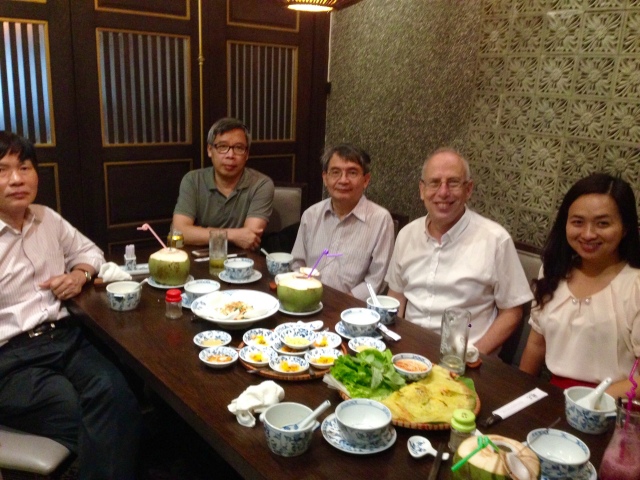 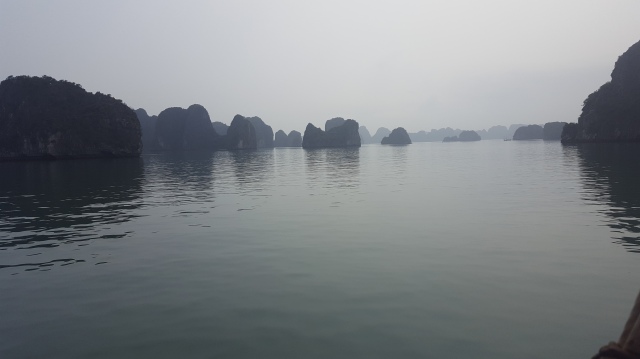 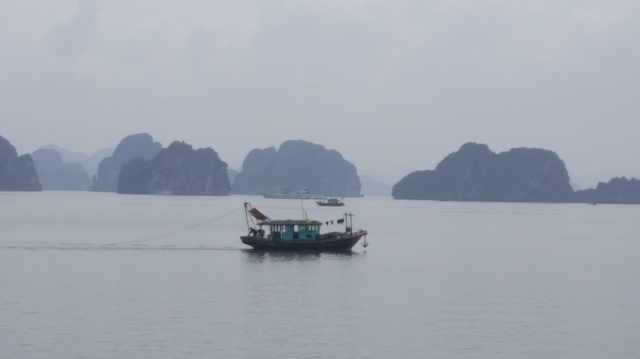 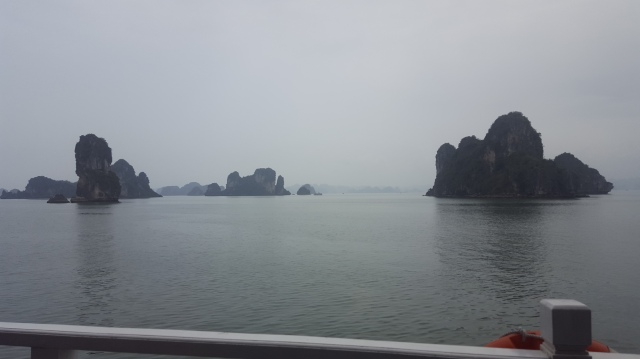 Janet Love, Frank Love, Seth Love, Tami Kalai (my sister), Dora Love, Hanoch Kalai (my father), near our home in Jerusalem. Below, a few years later with the jacket. 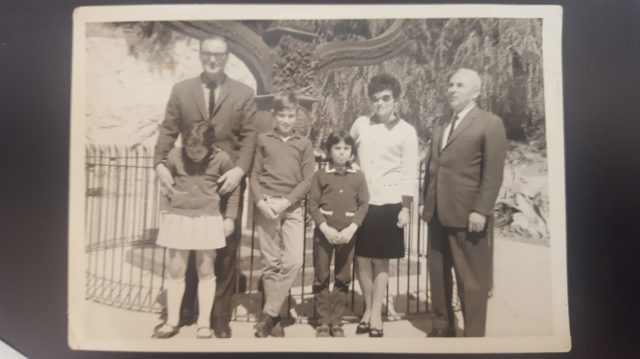 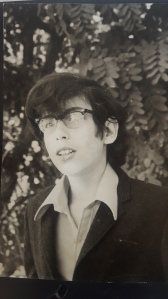