Test Your Intuition 42: How Much do you Gain by Knowing The Game You Play? 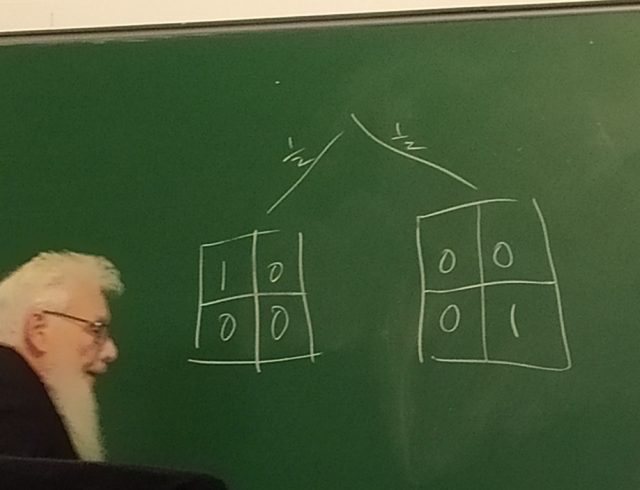 One of these two games is chosen at random with probability 1/2. And both players don’t know which one was chosen. Once this is done the game is repeated infinitely many times.  The players dont know what are the payoffs in each round! But the players do know after each round how the other players played. Both players want to guarantee as high as possible average payoff (as the number of repetitions tend to infinity).

We first ask what are the payoff that each player can guarantee.  If the row player chooses a mixed strategy  of playing T and B with equal probabilities he can guarantee that his expected average gain will be 1/4. The column player can also choose a mixed 1/2 1/2 strategy and guarantee that the expected amount of payment for each round is at most 1/4. So this is the value of the game.

Enters one side information

Now comes the twist: Suppose that the row player is told which game is played.

TYI: How much on average can the row player guarantee?

In the picture above you see Bob Aumann discusses this game during a celebration for his former student Professor Shmuel Zamir.

6 Responses to Test Your Intuition 42: How Much do you Gain by Knowing The Game You Play?