Noisy quantum circuits: how do we know that we have robust experimental outcomes at all? (And do we care?)

In a recent post we discussed Google’s claim of achieving “quantum supremacy” and my reasons to think that these claims will not stand. (See also this comment for necessary requirements from a quantum supremacy experiment.) This debate gives a good opportunity to discuss some conceptual issues regarding sampling, probability distributions, statistics, and computational complexity. This time we will discuss chaotic behavior vs. robust experimental outcomes.

On unrelated matter, I just heard Shachar Lovett’s very beautiful TCS+ lecture on the sunflower conjecture (see this post on the Alweiss, Lovett, Wu, and Zhang’s breakthrough). You can see the lecture and many others on the TCS+ you tube channel. 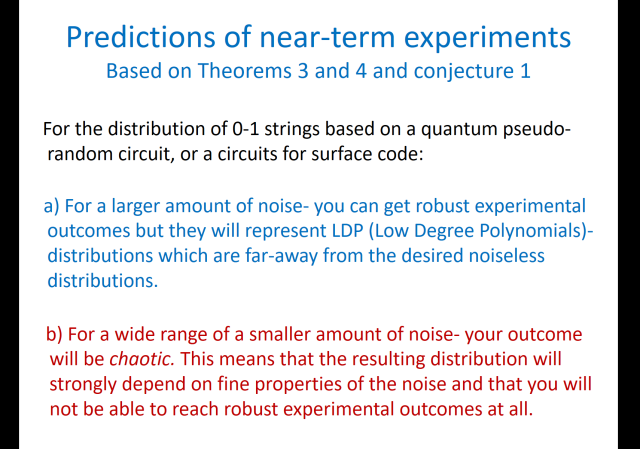 Slide 30 from my August, ’19 CERN lecture: predictions of near-term experiments. (Here is the full powerpoint presentation.) In this post we mainly discuss point b) about chaotic behavior. See also my paper: The argument against quantum computers.

which is a 0-1 string of length

from a certain distribution

. The research assumption is that

is close enough to a fixed distribution

accounts for the computing process and the noise) which is very hard to be demonstrated on a classical computer. By looking at a large number of samples you can perform a statistical test on the samples to verify that they were (approximately) sampled from

, or at least that they were sampled from a probability distribution that is very hard to be computed on a classical computer!

But, is it possible that all the distributions

‘s are very different? Namely that each sample is taken from a completely different distribution? More formally, is it possible  that under a correct modeling of the device for two different samples

has a very small correlation with

? In this case we say that the experiment outcomes are not robust and that the situation is chaotic.

Here are a couple of questions that I propose to think about:

This entry was posted in Computer Science and Optimization, Quantum and tagged chaos, chaos and computation, quantum supremacy. Bookmark the permalink.

10 Responses to Noisy quantum circuits: how do we know that we have robust experimental outcomes at all? (And do we care?)