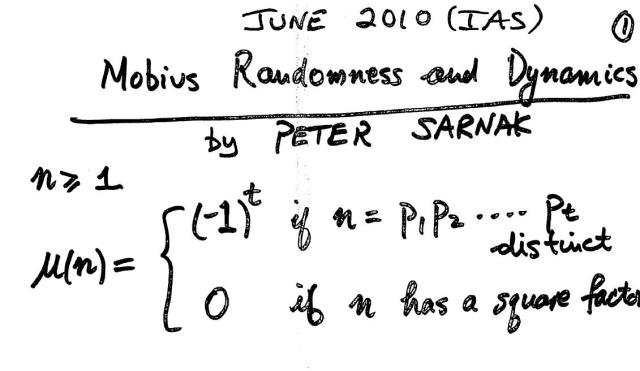 Last spring Peter Sarnak gave a thought-provoking lecture in Jerusalem. (Here are the very interesting slides of a similar lecture at I.A.S.)

Here is a variation of the type of questions Peter has raised.

Prime Number Conjecture: The correlation between the Möbius function and any function f from the natural numbers to {-1,1}, so that f can be described by a bounded depth polynomial size circuit, tends to zero!

Updates: (March) The conjecture made it to major league blogs as a very interesting blog post describing the conjecture appeared on Dick Lipton’s blog, and let to some interesting discussion. I posted two related Mathoverflow problems . The first
is about the discrete Fourier coefficients of the Mobius function and the second
is about Walsh-Fourier coefficients of the Mobius function. Ben Green have posted an answer to my Mathoverflow question indicating an affarmative solution for the

Prime Number Conjecture. The proof is based on combining the Linial-Mansour-Nisan theorem with Results and techniques by Glyn Harman and Imre Kátai, (From the paper Primes with preassigned digits. II. Acta Arith. 133 (2008), 171–184.)

Ben have written  a short paper giving the solution here.  (An  earlier note by Ben assumed GRH and the full paper contain the extra work is needed to prove it unconditionally.) This is a very nice result. Ben is also optimistic that showing that all Walsh-Fourier functions are orthogonal to Mobius (which is a more general result) is within reach by combining the above result with results by Mauduit-Rivat.

Of course, the next logical step is the ACC[2]-Prime number conjecture.  This includes as a very special case the question if all Walsh-Fourier functions are orthogonal asymptotically to the Mobius function. The “Walsh-Fourier” functions are high degree monomials over the real but they can be considered as linear functions over Z/2Z. For that, replace the values {-1,+1} by {0,1} both in the domain and range of our Boolean functions? What about low degree polynomials instead of linear polynomials? If we can extend the results to polynomials over Z/2Z of degree at most polylog (n) this will imply by a result of Razborov Mobius randomness for AC0[2] circuits. (This is interesting also under GRH).

Jean also showed that under GRH

This result suffices to show under  GRH the “monotone prime number conjecture.”

While the questions about polylog degree polynomials over Z/2Z and about AC0(2) circuits  are still open, Jean Bourgain was able to prove Mobius randomness for AC0(2) circuits of certain sublinear size.

Jean also noted that to show that the Mobius function itself is non-approximable by a AC0[2) circuit (namely you cannot reach correlation say of 0.99) can easily be derived from Razborov Smolensky theorem, since an easy computation shows that

has correlation >0.8 with the 0(mod 3) function. So we have a simple argument showing that (for

be the classical Möbius function. Namely,

is a square-free integer and

is the product of

there is a  function

tends to zero as

tends to infinity, and such that the following assertion holds:

is defined by applying the circuit to the binary digits of

and people familiar with standard methods related to the prime number theorem.

Mobius randomness and the class P.

Peter’s lecture started (see the picture above) with the analogous much more difficult question involving the complexity class P. (In fact, he challenged the audience to find a counterexample.) Finding a function in P with bounded-away-from-zero correlation with the Möbius function is in the direction of a polynomial algorithm for factoring – a problem which is entirely beyond our horizon. Peter then moved to describe other ways to study “Möbius randomness” which are based not on computational complexity but rather on certain notions of randomness (or, more precisely, of determinism) that arise in ergodic theory.

A Boolean function of n variables is simply a function

is a single gate leading to the output of the circuit.

The depth of the circuit is this number

of the number of variables. Much is known about Boolean functions described by such functions.