To cheer you up in difficult times 33: Deep learning leads to progress in knot theory and on the conjecture that Kazhdan-Lusztig polynomials are combinatorial. 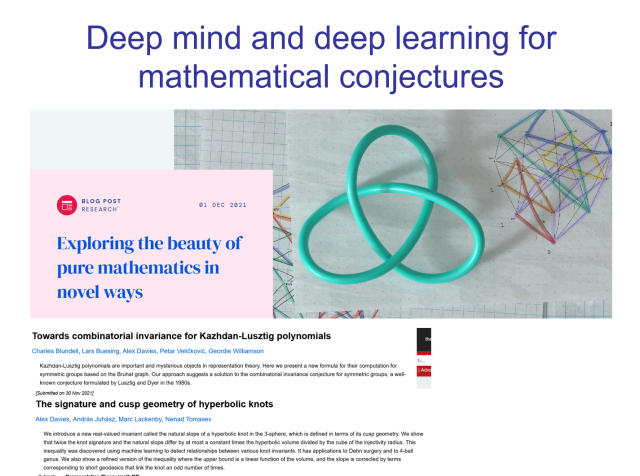 One of the exciting directions regarding applications of computers in mathematics is to use them to experimentally form new conjectures. Google’s DeepMind launched an endeavor for using machine learning (and deep learning in particular) for finding conjectures based on data. Two recent outcomes are toward the Dyer-Lusztig conjecture (Charles Blundell, Lars Buesing, Alex Davies, Petar Veličković, Geordie Williamson) and for certain new invariants in knot theory (Alex Davies, András Juhász, Marc Lackenby, Nenad Tomasev). There is also a Nature article Advancing mathematics by guiding human intuition with AI, on these developements. Here are also links to a new MO question and an old one on applications of computers to mathematics.

In a post on the “G-programme” I mentioned the Dyer-Lusztig conjecture (Problem 11) and a much much more general fantasy (Problem 12), So let me quote this part of the post here.

What happens when you give up also the lattice property?  For Bruhat intervals of affine Coxeter groups the Kazhdan Luztig polynomial can be seen as subtle extension of the toric g-vectors adding additional layers of complexity. Of course, historically Kazhdan-Lusztig polynomials came before the toric g-vectors. (This time I will not repeat the definition and refer the readers to the original paper by Kazhdan and Lusztig, this paper by Dyer and this paper by Brenti. Caselli, and  Marietti.) It is known that for Bruhat intervals with the lattice property the KL-polynomial coincide with the toric g-vector. Can one define h-vectors for more general regular CW spheres?

Problem (fantasy) 12: Extend the Kazhdan-Luztig polynomials (and show positivity of the coefficients) to all or to a large class of regular CW spheres.

This is a good fantasy with a caveat: It is not even known that KL-polynomials depend just on the regular CW sphere described by the Bruhat interval. This is a well known conjecture on its own. (This is the Dyer-Lusztig conjecture.)

Problem 11: Prove that Kazhdan-Lustig polynomials are invariants of the regular CW-sphere described by the Bruhat interval.

A more famous conjecture was to prove that the coefficients of KL-polynomials are non negative for all Bruhat intervals and not only in cases where one can apply intersection homology of Schubert varieties associated with Weil groups. (This is  analogous to moving from rational polytopes to general polytopes.) In a major 2012 breakthrough, this has  been proved by Ben Elias and Geordie Williamson following a program initiated by Wolfgang Soergel.

This entry was posted in Algebra, Combinatorics, Geometry, What is Mathematics. Bookmark the permalink.

8 Responses to To cheer you up in difficult times 33: Deep learning leads to progress in knot theory and on the conjecture that Kazhdan-Lusztig polynomials are combinatorial.