Ladies and gentlemen, this is an excellent time to tell you about the beautiful theorem of Tverberg and the startling proof of Sarkaria to Tverberg’s theorem (two parts). A good place to start is Radon’s theorem.

1. The theorems of Radon, Helly, and Caratheodory.

.  (Such a partition is called a Radon partition.)

are affinely dependent. Namely, there are coefficients, not all zero,

. Now we can write

. This last sum is positive because not all the

s are equal to zero. We call it

To exhibit a convex combination of

which is equal to a convex combination in

This trick of basing a partition on the signs of the coefficients repeats in other proofs. Take note!

Helly’s theorem: For a family

, of convex sets in

Proof: It is enough to show that when

is a point that belongs to all the

s except perhaps to

. We assumed that such a point

Now we can apply Radon’s theorem: Consider the Radon partition of the points, namely a partition

belongs to the convex hull of

. By the same argument

are disjoint, the point

The proof of Helly’s theorem from Radon’s theorem as described on the cover of a book by Steven R. Lay

Like for Radon’s theorem, there is a simple linear algebra proof. We can assume that

is finite; we start with a presentation of

as a convex combination of vectors in

we can use an affine dependency among the vectors in

to change the convex combination, forcing one coefficient to vanish.

So Tverberg’s theorem is very similar to Radon’s theorem except that we want more than two parts!

The first thing to note is that Tverberg’s theorem is sharp. If you have only

in a “generic” position then for every partition into

parts even the affine spans of the points in the parts will not have a point in common. (It is not entirely easy to prove it; and “generic” should be more than just “in general position.”)

The first proof of this theorem appeared in 1965. It was rather complicated and was based on the idea to first prove the theorem for points in some special position and then show that when you continuously changethe location of the points the theorem remains true. A common dream was to find an extension of the proof of Radon’s theorem, a proof  which is based on the two types of numbers – positive and negative. Somehow we need three, four, or

types of numbers. In 1981 Helge Tverberg found yet another proof of his theorem. This proof was inspired by Barany’s proof of the colored Caratheodory theorem (mentioned below) and it was still rather complicated. It once took me 6-7 hours in class to present it.

What could be the probability of hearing two new simple proofs of Tverberg’stheorem on the same day? While visiting the Mittag-Leffler Institute in 1992, I met Helge one day around lunch and he told me about a new proof that he found with Sinisa Vrecica. This is a proof that can be presented in class in 2 hours! It appeared (look here) along with a far-reaching conjecture (still unproved). Later in the afternoon I met Karanbir Sarkaria and he told me about a proof he found to Tverberg’s theorem which was absolutely startling. This is a proof you can present in a one hour lecture; it also somehow goes along with the dream of having

“types” of numbers replacing the role of positive and negative real numbers. Another very simple proof of Tverberg’s theorem was found by Jean-Pierre Roudneff in 1999. (Here is Sarkaria’s homepage.)

Note that when all the sets

are equal we return to Caratheodory’s theorem. (Why is it called colorful? Because we can think of the different

s as representing different colors and the conclusion will be that

is in the convex hull of a set of points containing one point of each color. Indeed, colorful.)

Proof: We will consider the minimum distance

realizes this distance, and suppose by contradiction that

which is perpendicular to the line through

belongs to the interior of one closed halfspace

and we first note that

belongs to the other closed halfspace

was a point in

in the interior of

then the angle between [

would be at a shorter distance from

. By Caratheodory’s theorem (in dimension

is in the convex hull of

s. In other words:

. Is it possible that

? No! This is impossible since

belongs to the interior of

is in the interior of

so is the half open interval

, and a point on this interval very close to

will be closer to

. This is a contradiction. Sababa! 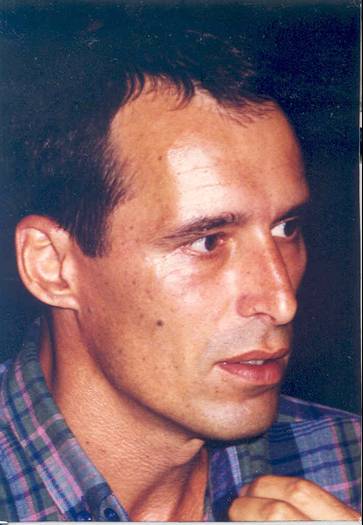 The next and last part with Sarkaria’s proof is here.

This entry was posted in Convexity and tagged Helly type theorems, Tverberg's theorem. Bookmark the permalink.