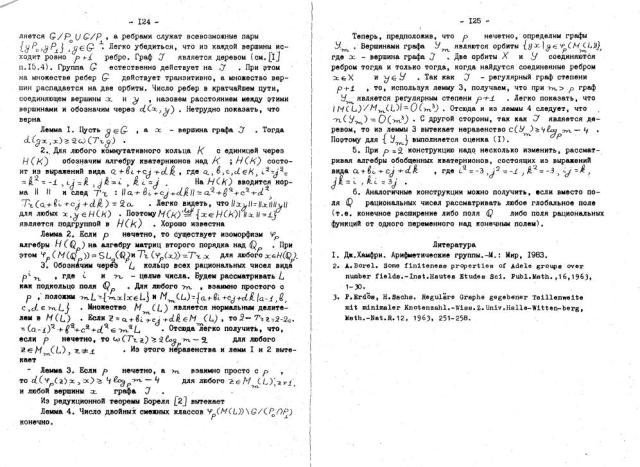 Ramanujan graphs were constructed independently by Margulis and by Lubotzky, Philips and Sarnak (who also coined the name). The picture above shows Margulis’ paper where the graphs are defined and their girth is studied. (I will come back to the question about girth at the end of the post.) In a subsequent paper Margulis used the girth property in order to construct efficient error-correcting codes. (Later Sipser and Spielman realized how to use the expansion property for this purpose.)

The purpose of this post is to briefly tell you about new Ramanujan graphs exhibited by Adam Marcus, Daniel Spielman, and Nikhil Srivastava. Here is the paper. This construction is remarkable for several reasons: First, it is the first elementary proof for the existence of Ramanujan graphs which also shows, for the first time, that there are k-regular Ramanujan graphs (with many vertices)  when k is not q+1, and q is a prime power. Second, the construction uses a novel “greedy”-method (with further promised fruits) based on identifying classes of polynomials with interlacing real roots, that does not lead (so far) to an algorithm (neither deterministic nor randomized). Third, the construction relies on Nati Linial’s idea of random graph liftings and verify (a special case of) a beautiful conjecture of Yonatan Bilu and Linial.

. A theorem of Alon and Boppana asserts that  for every

. Complete graphs and complete bipartite graphs are Ramanujan and the challenge is to find Ramanujan graphs where the degree d is fixed and the number of vertices n is large. The Ramanujan property proofed by Margulis and LPS for their graphs  relies on deep number theory.

Ramanujan graphs are superb expanders. Expander graphs can be defined as d-regular graphs for which all nontrivial eigenvalues belong to the interval

is fixed. Expander graphs were first defined (using a combinatorial expansion property) by Pinsker who also gave a probabilistic construction. The first explicit construction was achieved by Margulis. The original Ramanujan graphs (both bipartite and not) by Margulis and LPS had degrees which were of the form p+1, where p is a prime. A construction where the degree is q+1 for every prime power q was achieved by Moshe Morgenstern.

2-Lifts and the Bilu-Linial conjecture

matrix which encode the lifting. They conjectured that every d-regular graph has a 2-lifting where all the new eigenvalues are in the interval

. Markus, Spielman, and Srivastava proved the conjecture for bipartite graphs.

A few words on the proof:

The proof is not difficult and it gives certainly an elementary proof that Ramanujan d-regular graphs exist, and, for the first time, also for every value of d.  The proof relies in a crucial way on the matching polynomial of a graph which was defined by Heilmann and Lieb. The method involves studying interlacing classes of polynomials with real roots. The very basic skeleton of the proof is this: you show that the sum (or average) of all adjacency polynomials for 2-lifts lies in a restricted interval. Then you use the interlacing property to deduce that there is  a single adjacency matrix with the required property. The interval

Let me briefly talk about something else. Let

is an odd integer.

Recall that the girth of a graph is the length of the smallest cycle. We can ask: what is the minimum number of vertices

. Let’s look at one vertex

be the set of neighbors. Every neighbor in

be the set of all those. We can continue this way and if there are no cycles of length smaller than

all these vertices are different for

Erdos and Sachs used the probabilistic method to construct graphs with

Margulis’ and LPS’ papers gave a construction of graphs with

What is the truth?

So the correct coefficient is somewhere between 4/3 and 2. What is the truth? Is it possible to construct graphs with

I am aware of two general arguments (both proposed by Nati Linial) suggesting opposite answers to the question if the right answer is 2 or below 2:

1) [For <2:] The girth problem is analogous to the rate of error correcting codes. Moore bounds is just the volume bound which is usually not asymptotically optimal. Better bound is expected but may require some conceptually new ideas.

So you can test your own intuition regarding this problem. Unfortunately, a definite answer does not look immanent.

This entry was posted in Combinatorics, Open problems and tagged Ramanujan graphs. Bookmark the permalink.