Ladies and gentlemen,  a conference celebrating Noga Alon’s 60th birthday is coming on January. It will take place at Tel Aviv University on January 17-21. Here is the event webpage. Don’t miss the event ! 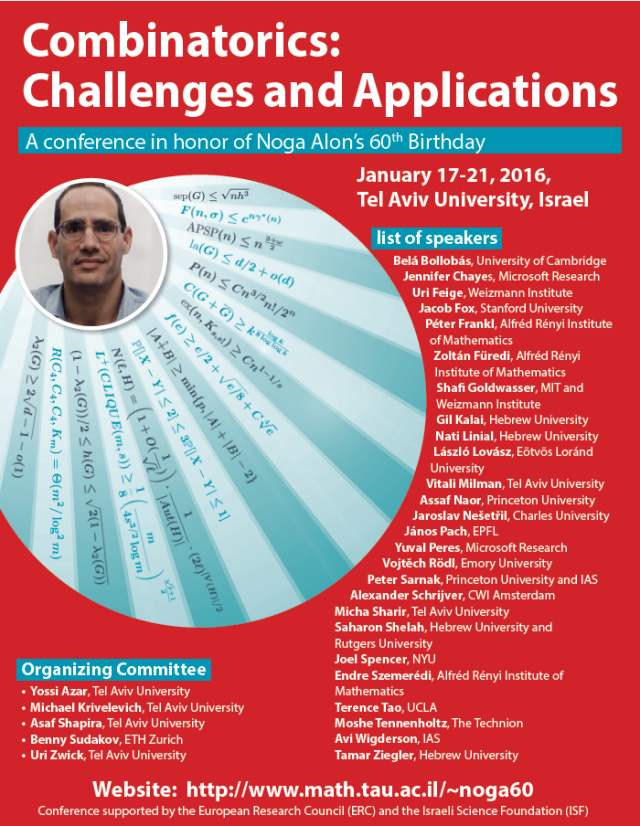 The poster includes 15 formulas representing some of Noga’s works. Can you identify them?

The first commentator  to identify a formula will win a prize of 10 Israeli Shekels (ILS) that can be claimed on Noga’s Fest itself, (or else, in person, next time we meet after the meeting.) Cash prizes claimed in person on the meeting  will be doubled! Cash prizes for the oldest and newest formulas are tripled! There is a limit of one answer/prize per person/ per week. Answers need to include the formula itself, tell what the formula is, and give crucial details about it.

For each of these formulas, once identified, the comment giving the latest place where the formula   is reproduced, (in a later paper or book not coauthored by any of the original discoverers) will be eligible also to 5 ILS prize. The same doubling and tripling rules as above apply. Here there is no limit on answers per person.

And even more cash prizes !!!

There will be 5 additional prizes of  20 ILS for formulas by Noga, that did not make it to the poster. Same doubling and tripling rules apply.

And Even More! Win a Travel Grant to the conference

Among all participants who are  students or post docs, one grant for a round trip to the meeting  will be given.

People involved in preparing the poster are not eligible.

And here are more details on the meeting itself. (The meeting also celebrates a decade anniversary for Zeilberger’s Opinion 71.)